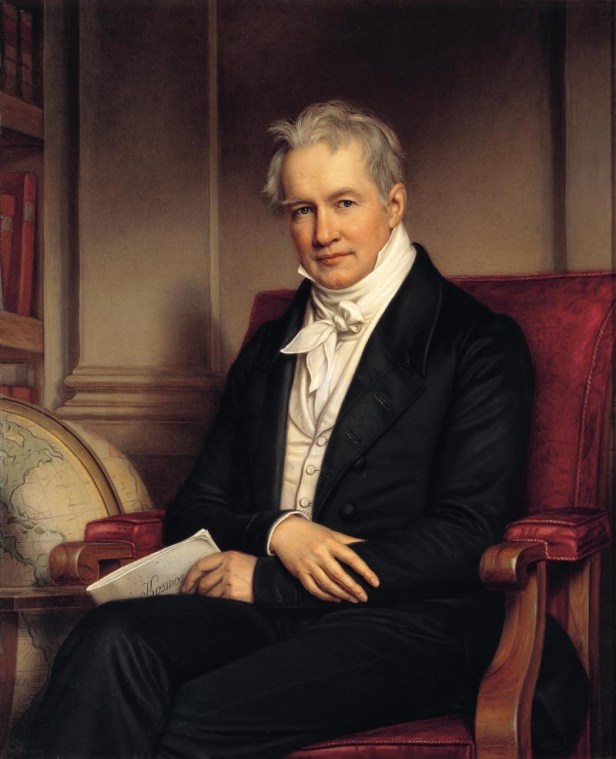 From 1799 to 1804 Alexander von Humboldt traveled through the modern countries of Venezuela, Colombia, Ecuador, Peru, Cuba, Mexico and the United States. His main merit lies in having made his trip in the prelude to Latin American independences, his destiny was to reach America.

Humboldt had signed up on two expeditions, one to Egypt with the Napoleonic Navy (1798-1801), and the other to India and the South Pacific with Captain Nicholas Baduin (1800-1803), but his plans were thwarted for reasons beyond their control. at his will, but with good luck for Humboldt: the English blockade made things difficult for expedition to Egypt, and that of India was complicated by the illness and death of its captain.

So he had no choice but to go to America, being a large part of the colony continent of Spain, Humboldt had to ask permission from the king of Charles IV and he got it with the condition of being “Inspector of Mines” for the crown, although the trip was entirely financed with the personal inheritance of the traveler.

So far, the Spanish Empire had been reluctant to let foreigners enter their colonies, but the Bourbons wanted to resurface the economy of their so-called vice royalties and admitted Humboldt as a mine inspector.

At the end of his trip through the Spanish Empire in May 1804, he embarked from Havana to Philadelphia in the middle of a terrible storm that almost cost him his life, he would write in his diary that it was the end of a life full of good fortune, however fortune continued to follow him when on May 19 he reached the mouth of the Delaware.

During his stay in Caracas in 1799, Humboldt listened with enthusiasm for the first time the names of Washington and Franklin, years later he would be personally invited by the US consul in Havana, to meet with government officials, who were very interested in knowing the analysis of the expeditions carried out by the Spanish Empire.

On May 24, 1804, once on American soil, he wrote his first letter to President Jefferson and as a good writer, he knew that a good author should ring the bells to be heard, so he began his letter saying: “I have arrived from Mexico, very blessed to this republic… ”; This was false because he had sailed from Havana, although administratively the General Captaincy of Cuba had been part of Mexico, New Spain.

The United States had just bought Louisiana from France and Humboldt knew that Jefferson was very interested in the territories of northern Mexico to continue the expansion of the nascent country. The so-called 17th century, the century of lights, the concept of freedom and the abolition of slavery was too avant-garde, Humboldt was particularly interested in the American philosophy of freedom.

The ideals of the French Revolution had guided Humboldt’s ideals and wanderings around the world, he was a revolutionary aristocrat for his time, before addressing Jefferson, he had read his work «Notes from the State of Virginia», for which he did Mention in his letter.

In Philadelphia he was introduced to the American Philosophical Society, of which Jefferson was president, the researcher became the celebrity of the day, hypnotizing American philosophers with his wisdom, was led with high reluctance to the White House.

He was received in Washington with high distinction, a year after the purchase of Louisiana, carrying a present under his arm: personally deliver Jefferson maps and statistical information of Mexico and a memo with data such as population, commerce, agriculture and even the military forces in each province, the text was entitled: Geographic-political tables of the Kingdom of New Spain.

Humboldt believed innocently that knowledge should not have barriers and information should be freely shared, so during his meeting with Jefferson, he toured the newly built White House and spoke specifically of the Louisiana-Mexico border, as well as the limitations of the the state of Texas, to which Jefferson insisted was the Rio Grande, but the spaniards argued to be the Sabino River, there was also a broad talk of the political development of Spanish America and as wise men, they exchanged views on astronomy.

Thomas Jefferson had privileged access to all the information collected on Humboldt’s trips, even before his treaties were published in Europe, this information will be studied in detail and used to strategically destabilize New Spain, plan a war in advance to invade the territories of northern Mexico.